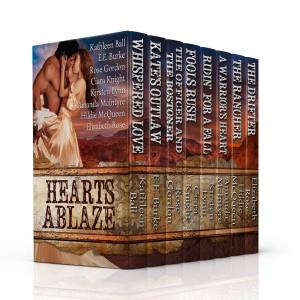 Eight bestselling authors. Eight sizzling tales of the Old West to set your heart ablaze…
From the wild Pacific forests to the lonesome plains, on wagon trains and at frontier outposts, fall in love with lumberjacks and soldiers, trailblazers and trick riders, courageous warriors and rugged cowboys…

In Whispered Love, bestselling author Kathleen Ball takes you to the wild Pacific Northwest, a land bristling with handsome, well-muscled lumberjacks. Foreman Samuel Pearse has only one rule; no women allowed. Until he finds one asleep in his bathtub—Pat Clarke, the company cook. With her secret revealed and her virtue at stake, Pat turns to the only man who can help her…the one man who sets fire to her heart.

In Kate’s Outlaw, award-winning author E.E. Burke spins a suspenseful yarn about a half-breed desperado who abducts—and then rescues—a railroad heiress. On the run from danger, with enemies on both sides, Jake and Kate seek solace in each other’s arms…and ignite a love as powerful as it is forbidden.

The Officer and the Bostoner, from USA Today bestselling author Rose Gordon, follows the adventures of a well-to-do lady traveling cross-country to meet her intended. Instead, she finds herself stranded at a military fort and forced into an unwanted marriage. Can a hot-blooded officer spark love in his wife’s cold heart?

Fools Rush from USA Today bestselling author Ciara Knight. A young woman, desperate for independence from all men, embarks on a crazy cross-country wagon train adventure disguised as a man. Instead of finding her independence, a bounty hunter captures her under the guise of horse thieving, a crime punishable by hanging. Will a man she’s lied to for months save her, or will he surrender her to a monster with a badge?

Ridin’ For a Fall by Kirsten Lynn immerses you in a fiery tale of forever love. When circumstances force best friends and Wild West Show performers, Lena Boden and Kyle Allaway to marry and return to Wyoming, they must stand together against internal doubts and external forces seeking their destruction—or risk a fall that will knock them out of the saddle for good.

A Warrior’s Heart, by bestselling author Amanda McIntyre, brings to life the passionate story of a bold Cherokee warrior and the brave white woman he rescues from certain death. Thrown together by circumstances not of their own making, they overcome betrayal and tragedy to find a love strong enough to bring nations together.

The Rancher, by bestselling author Hildie McQueen, transports readers to 1870s Montana Territory and into a sensual encounter between an injured rancher and a woman running for her life. Sometimes love enters at the worst moment…

In The Drifter, bestselling author Elizabeth Rose takes readers on an epic journey across the plains, as drifter Chase Masters shows up wounded at Nessa Pemberton’s stagecoach relay station mistaken as the bandit who killed her husband. Can a single mother learn to love again and put her trust in a man who is nothing but a drifter?

Ignite a new love for the Old West. Order your copy today for only 99 cents.

DESIRES OF A BARON is ON SALE for 99c through today (or sometime midday tomorrow when Amazon gets around the changing the price.

Giles Goddard, Lord Norcourt is odd. Odder still, he has suddenly taken a fancy to his brother’s love interest, the fallen Lucy Whitaker. Lucy was once thrown over by a lord and she has little desire to let it happen again, but she’s about to learn that his desires just might be enough for the both of them.

The first meeting for James, Earl of Wynn and Miss Charlotte Cavanaugh was not so spectacular. Come to think of it, neither was the second which led to a hasty marriage followed by three years of speculation as to why the two were never seen in the same room. But that’s all about to change…

When an anonymous letter of admiration—and scandalous invitation—arrives for Charlotte, James realizes this might be his chance to start over, and thus begins The Wooing Game.

After almost five years, Marjorie Reynolds and Gabriel Ellis will have their happily-ever-after!!!

Five years seems like an eternity and I cannot believe it has been that long, which it hasn’t yet, but by the time the book comes out it will be close.

I recently agreed to do a cross-promo group for next summer and then was informed, you need to be showcasing a new book. So alas, that is all the motivation I needed. The working title is: His Penniless Bride and will be number 2.5 in the Banks Brothers’ Brides series. Yes, I am aware that Gabriel isn’t a Banks, but there just isn’t anywhere else to fit their story in. I have already started and I am super excited. More details…including a cover, coming soon.

All the best this week,

USA Today Bestselling and Award Winning Author of more than a dozen unusually unusual historical romances that have been known to include scarred heroes, feisty heroines, marriage-producing scandals, far too much scheming, naughty literature and always a sweet happily-ever-after. When not escaping to another world via reading or writing a book, she spends her time chasing two young boys around the house, being hunted by wild animals, or sitting on the swing in the backyard where she has to use her arms as shields to deflect projectiles AKA: balls, water balloons, sticks, pinecones, and anything else one of them picks up to hurl at his brother who just happens to be hiding behind her. View all posts by Rose Gordon

Share your thoughts--I'd love to hear them! Cancel reply