First, a huge thank you to everyone who hopped with us these past few days. The random winner of my giveaway for a copy of Jessie: Bride of South Carolina is Colleen C. (I’ll email you shortly.)

The Grand Prize winner of the whole hop is: Laurie.

Now, something for everyone who had to deal with that relation yesterday–you know the one: He scrapes all the crusty stuff off the top of all of the casseroles. Or she nags you “When are you going to find someone to marry?” “When are you going to have a baby” (even if it’ll be your fifth). Or he wants to stand in front of you and talk about the election results and you can’t get away and by the time you do, your favorite pie is gone! The list is long, we all have that ONE person who you invite because they’re family and you truly do love them to pieces, but they’re like a fine wine or cheese: a little of Uncle Ralph or Aunt Fern goes a long waaaaaay.

Well, in honor of surviving it, hopefully like a truly lady…or gentleman, I have put my entire Gentlemen of Honor series down to .99 each from now through Monday!

Secrets of a Viscount

One summer night, Sebastian Gentry, Lord Belgrave hauled the wrong young lady to Gretna Green. When her identity is exposed, the only obvious solution is to get an annulment. Only, just like his elopement plans, things didn’t go as planned and while she has reason to believe they are no longer married, he knows better. Wanting to make things right for her, he offers to help her find a husband…

Isabelle Knight has just been given an unexpected fortune and is in the midst of doing what she never believed she’d have to do: spend a Season on the Marriage Mart. Finding no one who seems to catch her fancy–or even seems bearable to tolerate until death do them part–her entire world is sent spinning with the sudden appearance of none other than her former husband.

Isabelle is in no position to refuse his offer to help her find a husband and reluctantly agrees, but what neither counts on is her future husband just might be the one she’s still secretly married to.

Desires of a Baron 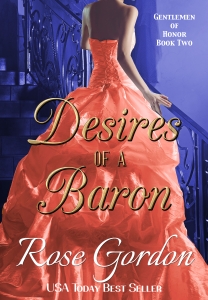 Giles Goddard, Lord Norcourt is odd. Born with his life’s cord wrapped around his neck and sent away to Ireland to be raised in an orphanage run by nuns, he’s known nothing but the cold sting of being misunderstood and altogether unwanted. But that’s all about to change…

Lucy Whitaker is a fallen woman who has done her best to build a life for her and her son. But when her son finds a battered gentleman left on the side of the road, her entire world is about to come crashing down as she once again finds herself caught between two brothers: an heir and a spare.

Will Lucy’s dislike for nobility forever keep her from eternal happiness or can Giles convince her to follow her heart and take a chance on loving a baron?

Passions of a Gentleman

After being thrown over for the second time in one Season, Mr. Simon Appleton’s interest in courting another young lady is less than his interest in reconciling with his estranged brother.

Entering into her third, and dare she hope final Season, Miss Henrietta Hughes has a single goal: make it to August without becoming engaged, thus securing her sister’s promise of being allowed to become a spinster.

But with the most scandalous woman to ever step foot in London acting as Henrietta’s chaperone and Simon’s undeniable urge to vex her every chance he’s afforded, they both might find themselves with new plans.

Also, still on sale through Monday:

Tired of living under her father’s iron thumb of control Jessie Wilcox decides to do the unthinkable: run away to Montana as a mail-order bride. The only obstacle in her way: the one hundred miles between her home in Williamsburg County and the train depot in Charleston.

Joel Cunningham is in utter disbelief when the girl he once loved beyond reason is on his front porch asking him to disobey her father’s wishes and drive her to Charleston. Logic and reason scream no; his lips, however, say yes.

Will the one hundred miles ahead of them be enough to overcome the five years of painful regrets or will Jessie follow her dream for a new life in Montana?

I hope you all have a fun and safe Friday!

USA Today Bestselling and Award Winning Author of more than a dozen unusually unusual historical romances that have been known to include scarred heroes, feisty heroines, marriage-producing scandals, far too much scheming, naughty literature and always a sweet happily-ever-after. When not escaping to another world via reading or writing a book, she spends her time chasing two young boys around the house, being hunted by wild animals, or sitting on the swing in the backyard where she has to use her arms as shields to deflect projectiles AKA: balls, water balloons, sticks, pinecones, and anything else one of them picks up to hurl at his brother who just happens to be hiding behind her. View all posts by Rose Gordon

Share your thoughts--I'd love to hear them! Cancel reply